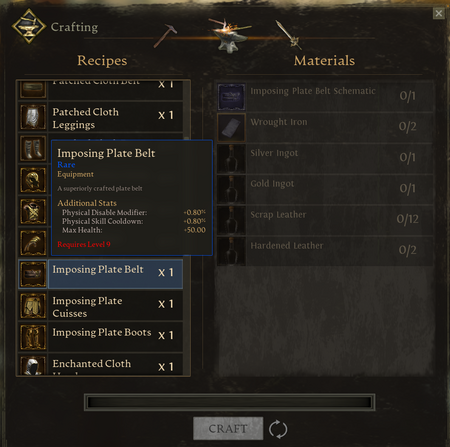 Crafting in Ashes of Creation is recipe (blueprint, schematic) based, not RNG based.[1][2]

I think Star Wars Galaxies had a great crafting system... The resource gathering and the crafting system altogether as a whole really was I think way beyond its time. That's kind of the direction we want to go, where there's choices to be made in the crafting system and those choices change what you end up with... It's not just about doing X recipe to get Y item. You know, there's actually thought involved in it and there is you know a market to be captured based on those decisions.[7] – Jeffrey Bard

The ability for players to create original recipes will not be present in the game at launch, but may be included at some point in the future.[3]

There are many different ways to achieve recipes. We want to take crafting and house the location of those recipes throughout different progression paths, so that not everything is pigeon-holed into one way forward.[9] – Steven Sharif

We're definitely going to have rare recipes. We're going to have a very active recipe market that how players find them and how they discover them is going to be very diverse. It's not just going to be drop oriented. It's going to be discovery, adventurism, treasures, repetition of a particular activity that might yield something, deconstruction that might learn how to create a recipe. There's a lot of different functionality that's present that's going to be utilized.[3] – Steven Sharif

A royalty system where players can license recipes to other players for a certain amount of time and collect royalties was discussed as a possibility.[10]

The developers will be seeking testing feedback on the addition of a gameplay layer to crafting that determines the outcome based on the player's performance.[11]

For example, if you're creating a sword, and you are crafting that sword, you will have an interface- a gameplay layer that you will see and you will begin to hammer actually that sword into an appropriate outline. And your performance there can help influence the outcome of that craft.[11] – Steven Sharif

Without getting into too much detail I will say that it's likely that you will see some inspiration surface itself in that regard.[12] – Steven Sharif

We did discuss that type of a feature where the skill of the crafter would grant a greater window of skill-based type crafting. So the higher master level you have of crafting a certain item, the greater your potential to impact the quality of that item might be... The concern obviously that we have when going into developing this type of system is that we don't want what is a fun - you know for lack of a better term - mini-game to be something that becomes repetitive and kind of makes it monotonous... If when we start to flesh out the crafting system and we take a look at that interaction of melding crafting, the actual activity of making something, there is room in the design sheet for different iterations of that particular action; and we may see something come about that can be skill oriented, but that's something that's going to require a lot of testing and different iterations from a design standpoint.[13] – Steven Sharif