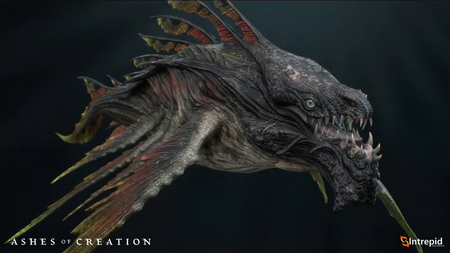 This is one of the Alpha-2 raid bosses that are going to be in the ocean. That'll be interesting when you come across that, what might happen. Good luck. We should have added a scale there because yeah, it's a big boy. The number of ships needed for that one's going to be a lot.[1] – Steven Sharif

Naval combat involves different types of Ships with varying capabilities, armaments and roles to play out on the high seas. There will be a balance and counterbalance between ships from PvP and PvE perspectives.[1][2]

Battles at sea will be epic. They will have some supreme rewards and/or losses if the battle succeeds or fails.[6] – Steven Sharif

A: The open seas have have a good amount of content; and that content when completed will give its contribution to a nearby node; and that is something that people who live on the sea, or desire to live on the sea, will be able to um contribute in a way.[8] – Steven Sharif 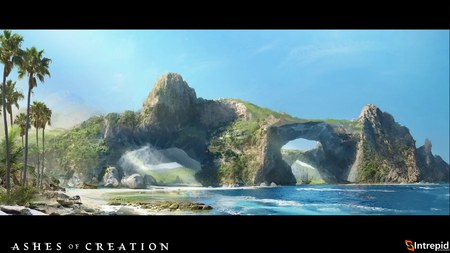 Operators of a ship's weapons platform can initiate naval PvP against another ship in the following three cases.[13]

Another important change that has occurred is the open seas is now an automatic flagged location. So when you move off of land we have a flagging system that protects and the open seas are international waters where you need to be careful; and there is a lot of opportunity at Sea; and because there's a lot of opportunity that's unique to that content- that's unique to that sea: that's treasure finding; that's NPCs; that's a lot of different stuff there needs to be risk associated with opportunity.[14] – Steven Sharif

We have a very intuitive UI that that as you approach the border between open sea and coastal area you are notified of that. You are warned ahead of time. There's a countdown when approaching. We interpolate the distance travel and speed you're moving and you get to see "I'm entering open waters"; and when you do you have this big trophy call out on screen that says "You have entered the open sea. Territory fraught."[16] – Steven Sharif

Ships will have status effects based on the weapon types attacking the ship or the encounters that the ship is facing.[18]

The potion launcher idea will be incorporated as part of how cannons operate on ships; and these will be very large potion launchers obviously. The storage of this ammunitions are going to be very important as well... It's not going to be the same potion every time. You can equip the cannon with different types of potions that have different types of effects from a munitions standpoint; and I think that's going to provide a very cool gameplay because as you see the different color of the trail that's coming out of the potion launched, you'll be aware of what your adversary is using and how that affects your ship; and you'll be able to counter based on maneuverability, based on whatever you want to counter that with. I think that's going to present a very interesting dynamic to the attacks with these ships.[20] – Steven Sharif

Gunpowder (black powder) weapons will not be present in Ashes of Creation.[22][23]

I previously said there was not going to be gunpowder in Ashes. What there will be is something very similar to gunpowder but has a more arcane nature to it. It's not necessarily going to be explainable through the conventional means of chemistry, metallurgy, and physics and what not, but rather the Essence is the core component of many types of magic, one of which is obviously going to be evocation type magic; and that evocation can have some explosive tendencies.[22] – Steven Sharif

Weaponry such as Potion launchers, Siege weapons and weapons used in Naval combat are based on the arcane arts.[20][22][24]

As we said in the past, were not really about that black powder life. Instead it's really going to be focused on the arcane arts: The elements; the use of radiance and darkness; and then those being employed in larger weaponry, such as the type of siege weaponry between ship battles as well as those and sieges. A potion launcher is an example of the arcane energies that can be mastered in order to facilitate these highly destructive alchemical blends that can be created.[24] – Steven Sharif

Ship destruction at sea will leave its crew stranded, since ships (excluding Naval caravans) may only be summoned from a port or harbor.[25][26][27]

We don't have a recall... There is consequence for you losing the means of your mobility and if you lost the means of that mobility then those consequences are it's going to take you longer to get to where you need to go, or you're going to have to suffer some experience debt.[25] – Steven Sharif

I mean traditionally if we did not use dynamic destruction, that what we would use is decals to simulate damage on the ship based on an overall hit point value. At certain hit point values we would swap out the mesh to show a more destructive state potentially; and that and you know at that point for a user in regards to immersion you know both are very similar from the immersion factor right?[28] – Steven Sharif