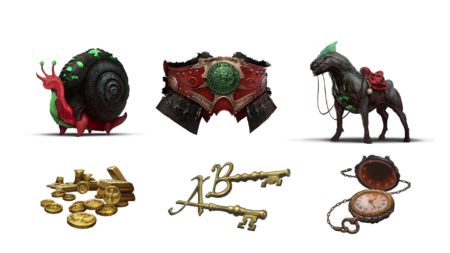 The Voyager pre-order pack is available from the Cosmetic store.[1]

A timeless tradition among the Ren'Kai, arena combat is a spectacle to behold, with each warrior's skill and heart laid bare for all to see. Being a central aspect of their culture, many attendees watch these pitched battles for entertainment, while others study them in order to better their own styles. Regardless, all Ren'Kai know how to fight at some level - and success in the games is always met with respect, and oftentimes, more challengers.[3]

Pre-order packs are available from the Cosmetic store.[4]

We offer cosmetics for players who wish to support the project early. The exclusive nature of the limited availability is something I think collectors value. If you buy cosmetics as an MMO player, I know I enjoyed if the cosmetic is rare and not every girl at the party is wearing the same dress. In addition, these cosmetics are used to populate the world through NPC variants and color/texture changes so their offering aligns with our production schedule. The good thing about these packs is they contain no P2W advantages and there is no box cost, so from a mechanics standpoint you do not need to buy them to excel in the game on launch. And also, there are comparable and subjectively more grand cosmetics achievable in game as well.[5] – Steven Sharif 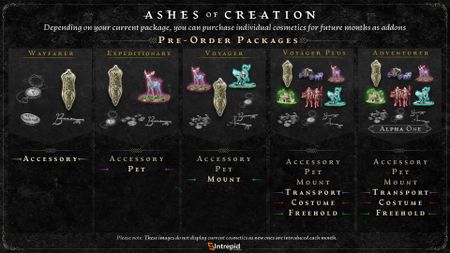 Pre-order pack cosmetic skins cycle monthly and are never available again for purchase. Apart from the cosmetic skins, the packages can also include subscription time, embers (virtual currency for future cosmetics when the game is live), access to alphas and betas, and other perks such as name reservation.[7]

These packs are completely optional and provide no vital components for succeeding in Ashes.[7] – Steven Sharif

Purchasers of pre-order packs have the ability to purchase future individual pre-order pack cosmetics (at the same or lower level as their pack purchase) as add-ons in the month that they are on sale.[2] [7][8]

Cosmetics owned prior to upgrading a pre-order pack are retained.[12]