Priests are NPCs that are present at Divine nodes.[1]

Divine nodes are focused on faith and skill/equipment augments.[1]

Divine node governments are chosen from citizens via service oriented quests that prove faith and dedication to the node.[2][3] 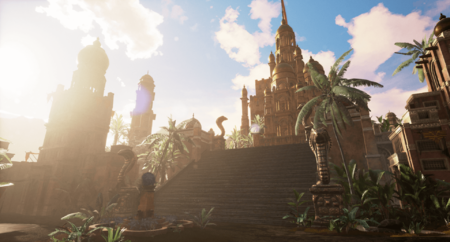 Religious temple in a Metropolis node.[3]

We're talking about a pantheon here, not necessarily separate religions. They're all kind of offshoots of who is the better god, or who is the god who identifies best with you.[5] – Jeffrey Bard

There are six primary religions as well as a Tulnar/Underrealm religion.[6][7][8]

There will be questlines. There will be certain actions that players are capable of taking to perhaps pursue the darker side of this metaverse so to speak.[10] – Steven Sharif

Sometimes games in the past have tried to shy away from heavy emphasis on religion because of the parallels that can occur between what is in the real world and this fantasy realm. I don't really subscribe to that theory. I think that religion plays a very significant role in the story of what Ashes of Creation is about and it is very much this almost monolithic idea of good vs. evil; so that is really at the crux of what the overarching narrative will be in the game; and I'm not trying to pigeonhole players into "everyone has to be good", like I said earlier there will be opportunities for players to deviate from that, should they so choose to roleplay in that regard.[6] – Steven Sharif

The Tulnar religion is a combination of religious beliefs of the major races as well as pagan beliefs of the minor races over time as they coexisted together in the Underrealm.[14]

The progression of the Tulnar- while they are still the staples of what were once the primary deities of the good pantheon remained for the Tulnar, over the time they existed and evolved into the society that they are at the return to Verra. It's much more similar... to the way the Creole religions advanced, with using components of Christianity as well as Voodoo and other smaller, more "paganesque" religions; and incorporated them into one. To that degree, you can correlate the way that society around the Tulnar has this almost combination of what were pagan beliefs from the minor races as well as the introductions of the major beliefs and religions from the major races, because they all came together in the Underrealm and survived in that regard. So you’re gonna see naturally a combination of those two things.[14] – Steven Sharif

There are player progression paths within a religion.[16][9]

It depends on their dedication to the religion itself; their performance when it comes to certain religion's religious objectives; their contribution to the development of that religion within the world. There's a lot of different markers that we use at each stage to determine how they progress within the religion.[18] – Steven Sharif